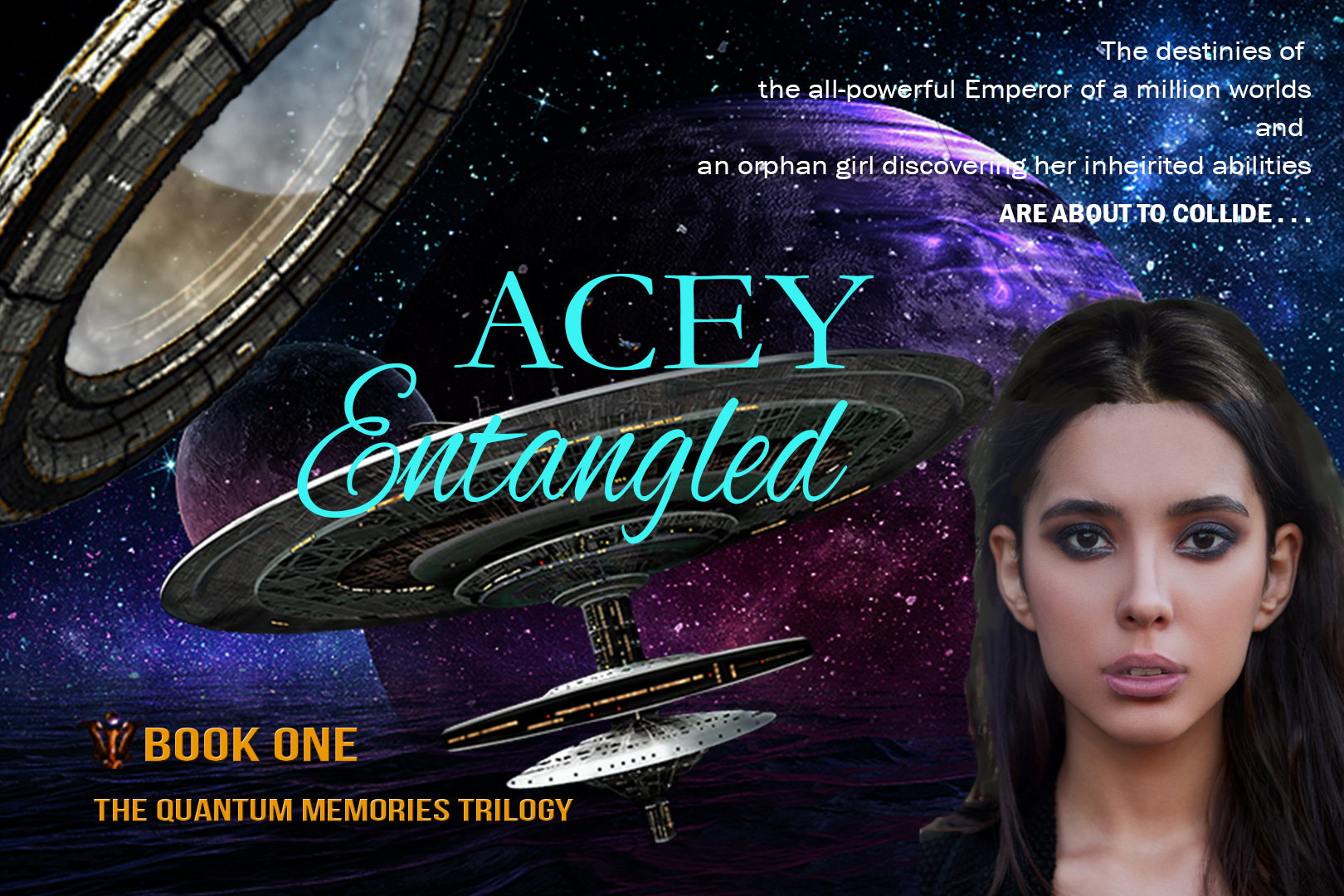 It’s my intention to finish the science fiction novel I’ve been working on for nearly two years exposed to the public eye. There are several reasons for this, but most important, it’s to get feedback from readers of speculative fiction, and if I do well, I hope for their support. ACEY Entangled is a high-concept, space opera set in a 25,000-year-old galactic empire connected by world Gates discovered by early explorers from earth. I’ve finished the first draft and am well-started into the second draft, which I propose to post here in episodes on a regular basis. Bear in mind, this means that all these words are not set in stone. There will be changes and alterations. It won’t be perfect. That will have to wait to a later draft. When I have the mail system set up and as much of the mechanics of the blog that I will need, you can sign up for notices of when the postings will begin. There’ll be a lot more author’s notes as we go along. I am looking forward to reader comments that will help me make this a better book. Thanks for participating!

The Terran Union found an unclaimed M-class star poking like an interstellar hernia between two star systems. Kiihacchet a system in Pansil Muwadan space, and Sakos, in the Republic of Arcturus. This exploratory mission could easily have exploded into a dangerous political incident between the Terrans, the Muwadans, and the Arcturans. Three of the six splinter entities of the ancient Terramonah Empire’s million-plus Gate worlds. However, the lone planet wheeling around the aged red dwarf star appeared worthless. Only marginally habitable. Still, the Terran Union laid claim to the new star system, identified simply as 870552 in the Imperial Interworld register. Their request failed to raise a ripple of dissent from anyone. By default, the interworld registrar on the Throneworld of Delagua granted the TU unilateral dominion.

That analysis changed in 24,942 of the current Galactic Era sixteen years later. A planetary assessment team identified a rich vein of Rhomentium in the mountains southeast of the bleak windswept planet’s equator. A Muwadan mining consortium estimated the lode of valuable metal could be lucratively strip-mined to depletion over approximately two hundred years. They seemed to be no other reasonable incentive for human habitation.

This assessment entitled the new system to a name. A TU bureaucrat on Nuwerth with a love of mythic Earth lore declared the star to be called Billabong, labeled its solitary planet Kalgoorlie, and optimistically designated the assessment team’s initial landing site, Neaveau City, as its capital, The duly awarded Muwadan contractors recruited itinerant miners from neighboring Gate worlds settling them in a rough mining camp at Whitehorse Harbor. A convenient site on the windward slopes of the newly dubbed Dunduin Mountains below the Rhomentium deposit. From here, they would mine, load, and ship barges across an inland sea to Adelaide spaceport for off-world shipping. And so, the amorphous settlement began to spread along the rocky eastern coast like an out-of-control patch of spikeweed.

Fifty years passed before Master Scientist Edouard Mondeleros arrived in Whitehorse accompanied by his two young grandchildren, Acey, nine, and Quin only four. Mastersci Mondeleros established himself as an intense, not-to-be-bothered, recluse willing to spend Imperial solars freely. He spared no time or expense in acquiring strictly off-world construction and technical expertise to construct and embed a reinforced blockhouse in the Dunduins foothills above Whitehorse. For seven months, materials, resources, and manpower flowed from through the spaceport in Neaveau City across the landlocked sea to the settlement. The blocky structure rose four stories above ground to house his new Interworld Geological Institute on the bottom two floors. The two floors above became the family’s residence. No mention was made of what might lay below.