Why I wrote the book 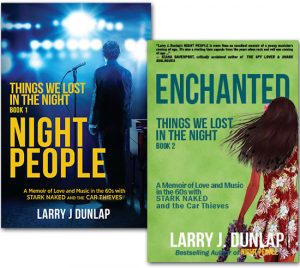 It was always likely I’d have to scratch the itch from living this story I’ve named, Things We Lost in the Night, has given me. I’ve been an addicted reader since I was old enough to hold a book. And I kept at it all through the years, even the music related ones, as I lugged a steamer trunk filled with books and games with me on the road. As a reader, maybe it was inevitable I would also be the one to write this story. But I hadn’t been able to find the time to do our story justice until forty-five years after leaving on a jet plane from Indianapolis for Oakland, California. Approaching the age when things usually slow down in a person’s life, little things began to give the project impetus. Most of us in the band would meet over the years, usually in Las Vegas, occasionally in the Midwest. We’d tell and retell the stories to each other, remind ourselves of who we’d been, where we’d gone, and what we’d seen, and on more than one occasion discovered differences in our remembrances. I should make it clear that this is my story; each of the others who traveled this path with me would certainly perceive the dramatic events of our journey from their own viewpoint.

We met to play and sing together one last time at the turn of the century before our drummer, Leonard Souza, left this world. He requested one last chance to rock out with his brothers before a terminal illness took him. Leonard died soon after. For us, the survivors, we got a good look at our own mortality, and it was depressing to realize no one knew about what we’d seen and experienced but us and the very few who made the trip with us. When we were gone it would disappear like smoke, as if it had never happened.

I tried to create a website, where we could collaborate and share our experiences but I did a poor job. Though it still exists, I dropped it soon after getting started when I found it was creating more contention than good feeling. But the desire to do something to avoid letting such a cool story just disappear into the dust, wouldn’t go away. The seminal moment was when my friend Dave, and our lead singer, told me that he, and Mac and Les, the other two o

f the four of us who travel this journey from page one to the end, felt our experiences were lonely memories we could only share with one another. No one else seemed able to believe or relate to who’d they’d been, what they’d done, and what they’d seen. That didn’t seem right to me.

Other things pushed the project along. One of my very best and oldest friends, who I’d lost contact with over the years, commented when we’d reconnected that he’d always considered my life a “cautionary tale” to tell his own children. My life could be seen in those terms, I supposed, but what good story wouldn’t seem cautionary depending upon point of view? Maybe describing the way it unfolded to me would allow readers to share my perspective.

Once I fully accepted the challenge of writing about Stark Naked and the Car Thieves, I wanted to avoid any of the earlier, and essentially unimportant, debates, and to do that I’d have to tell my personal story as the lens that makes it intimate and relateable. That bounded the book to the six years I was actively performing in the band, though there is inevitable back story to earlier years of growing up Hoosier. I would write about how I saw the band’s journey within the context of my whole life up until then, not limited to either my professional or personal life. The book rapidly evolved into memoir. As I’ve worked on the manuscript I was forced to look deep within my heart, face demons, and open my soul during the years of Things We Lost in the Night. Now, as I’m reaching the end of the writing, it is my story as I saw, experienced, and remember it, while I have done everything I can, researched everywhere I can think of, to remain faithful to the adventure we all experienced.

The story is about CHANGE. Everything had begun to change in the sixties on the west coast but not much of the wave had rippled over Indianapolis at the beginning of 1965. Things We Lost in the Night registers the seismic shock of young singers from Indianapolis dropped into the maelstrom of music, culture, ethos, re-invented religions, drug-induced mysticism, and the slippery change in the relationships between men and women in the San Francisco bay area in April of 1965. Not only was the world around us in constant change, so would I and those around me. And a deeper question: at what point does change look like predestination more than choice. My story’s about LOVE: the three women who dominated my personal life over these years: one I lost in moving west, another who became my companion and friend for several years, and the last, who nearly cost me my life and sanity. It’s about Love between band-brothers, a bond we share despite whatever differences we have, to this day. It’s about the incredible POWER OF MUSIC, the rock n roll emotional gateway drug that got us started, about living a life immersed in the power music invokes to empower, damage, inspire, wound, alienate, excite, and console human beings. Every day, music was the life breath, the soundtrack of our lives, as we added to the experiences of our audiences. My story is about LIFE AND DEATH, in both literal and figurative senses, a transformative trip through a rabbit hole to higher highs and lower lows than I could ever have imagined I would experience, being bigger and smaller than I’d ever thought possible. It was life-changing, life-shaping, and live-affirming. I pray I am skillful enough to share this experience with you.