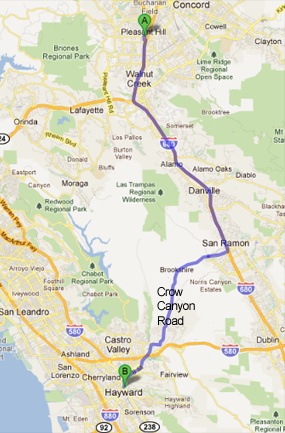 When Stark Naked and the Car Thieves were still called The Checkmates, and were newly arrived in California, most of us lived inland around Pleasant Hill and Walnut Creek (A) because the first club we worked in was in Pittsburg, CA a few miles further north and east as described in NIGHT PEOPLE [Chapter 6: California Checkmates]. It was pretty much a disaster to begin with though we closed strong.

Following a successful after-hours audition, [Chapter 7: No Plan B] we caught on at the Town Club in Hayward, California (B) in the San Francisco East Bay city of Hayward. This illustration shows the drive we had to make every night to get to the club.

It also illustrates why we needed drugs when we started playing both the night club, an after-hours in Oakland (north of Hayward and out of map view), and then a 6 to 10 am jam session back at the Town Club every Friday Night/Saturday morning, and Saturday Night/Sunday morning. There wasn’t enough time for us to get back to our inland home so we just stayed up the entire weekend for several months. [Chapter 11: The Pharmacist and the Nurse].