Death of an Aristocat 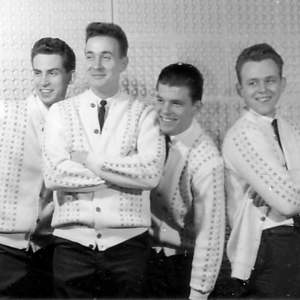 The doorbell on the side of our house next to the driveway rang. This doorbell, with its own higher pitched ring than the front doorbell, rang in the my bedroom in the basement, commonly referred to among my friends as the dungeon due to my insistence that it be painted battleship gray and because to get to it, you had to traverse the furnace room with it’s spooky tentacled maze of vents rising up from of the furnace’s heart to snake across overhead. In my teen years it had served as the bridge of a starship, the conning tower of a submarine, and clubhouse before becoming our rehearsal room. I went up the basement stairs and ushered in Hasty Smith and another guy who seemed to tumble down the open steps all elbows and knees. Chuck Tunnah, Hasty said, introducing him to Pat Baldwin and me, was an inch or two over six feet and kind of gawky like he hadn’t quite grown into his skeleton. He had dark hair combed back from a widow’s peak that made him look fiendish.
“Now listen you guys. Don’t start that “Charlie the Tuna” crap with me,” he said with a big grin, like the Joker’s in Batman, in reference to the Starkist Tuna cartoon spokesfish, “because I do taste great and unlike that cartoon Tuna, I have great taste. Just want to get that clear”

That was how I met Chuck Tunnah, the fourth singer of my original vocal group as we formed the Aristocats, in the Fall of 1957. On July 5, 2016, Chuck, Charles E. Tunnah, died peacefully at 75 years of age in an easy chair with the Indianapolis Star in his hands. As with so many of my friends and associates passing into their later years are beginning to disappear I fear my blog will become an obit page, so I will resist that except in special circumstances. Though Chuck and I had not been in touch for many, many years, this loss struck very close to home to me. Hasting Smith, Jr., mentioned above, and Chuck sang in our high school choir and the exclusive Madrigal singers, and both patiently taught Pat Baldwin and me, both complete neophytes, how to learn and sing the popular music we liked. Hasty soon left us to go to Purdue, and eventually to become a nuclear rock scientist in Los Alamitos, New Mexico, where he passed away prematurely and suddenly as he warmed up to begin an early morning run.

Chuck, Pat, and I found Dave Dunn and went on to become the Reflections, and to record and release our first two records in Indianapolis in 1964. One of them, In The Still of the Night, became a regional hit on Chicago’s WLS, outcharting the Beatles for a couple of weeks. Chuck is the bass singer who first started the bass line that brought that version of a classic to prominence for us.

In Night People though, Chuck is introduced and disappears in the same paragraph; he never made the trip to California and on to the adventure that turned us into Stark Naked and the Car Thieves. Though he could be generous and kind, he could also be loud and obstreperous and because of that, he ended up relegated to staying in Indiana. He, and Hasty, have now passed beyond the curtain of life. When Hasty died, I felt the harsh breezes of change whispering through the hole in my history he left behind. The wind has picked up.