A Lost Recording from 50 Years Ago! 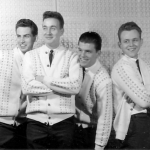 For those of you who’ve been following along, Stark Naked and the Car Thieves began as an acappella vocal group back in Indianapolis. We called ourselves the Reflections when our very first recording was released in late 1963 on WLS radio in Chicago. Unexpectedly, our uptempo version of In The Still of the Night hit the Chicago charts in early 1964 at the same time the Beatles did with I Want to Hold Your Hand. If you can read the chart below you’ll see we arrived at #17 while the Beatles languished at #40. Our producer screwed up and lost or accidentally destroyed the master of In The Still of The Night so even though we got great airplay and were about to break out nationally, when the charts came out two weeks later, our record had fallen off into oblivion while the Beatles were on their way to number one. 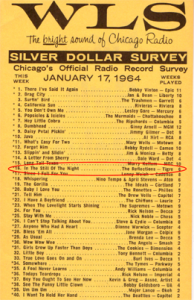 What you don’t know is, and that’s because even I’ve never heard or seen a copy of the record since we recorded it 50 years ago, our producer rushed us into the studio to get another record out to try to take advantage of the tremendous interest in the Reflections up in the Windy City. Since we sounded a lot like the Four Seasons, he found a song by Larry Huff, who’d co-written Easier Said Than Done for the Essex, called In the Beginning. We tried to adapt to sound like it was from the original Jersey Boys right in the studio, recording literally overnight. By the time it was pressed, the Reflections who recorded (Just Like) Romeo and Juliet) had hit with their song, and our name and all the good will we’d built up with the previous record was lost.  He had to decide on the spot what we would be called so he decided we were the Illusions. But the record failed and soon the Indy Sound no longer existed.

Today, doing some research for Things We Lost in the Night, I ran across our recording on YouTube.  I can’t tell you how amazed and pleased I was. Made me glad I got up this morning. It’s the weirdest thing though, strangers have put almost all our records up on YouTube. I’m hoping the person who posted this knows where I can buy a copy of the original record.

Probably as good a time as any to invite you to the Open House at my new website! I’m halfway through my final draft and scheduled some time to get my site in order. Among other features, is a list of thirteen songs we recorded and that are an important part of Things We Lost in the Night. They’re listed in chronological order (excepting this one of course), and make something of a musical history of the band under its various names. It’s on the THINGS WE LOST page in the Songs from TWL tab here on this site. There’s also a First Chapter sample from the book and two audio excerpts as well as short blurbs from the book. Come one, come all! Look around. Log in , say hi. Let me know what you think.