On the Passing of the Jefferson Airplane

74 seems to be a fatal number. So many greats falling by the wayside at this milepost. Since it’s my number, can’t help but wonder, but I don’t think it’s my time yet. I’ve still got things to say … Read this fascinating article about Paul Kantner and Signe Toly Anderson, Airplane’s first girl vocalist. She was 74, too

It was sad enough that Jefferson Airplane founding member Paul Kantner, the keeper of the famed San Francisco band’s flame throughout its turbulent half-century, died last week, from heart failure. A deeper melancholy set in with news of the death the same day of the Airplane’s first female vocalist, Signe Toly Anderson, from cancer. Both were 74.

Source: On the Passing of the Jefferson Airplane YouTube Videos of Stark Naked and the Car Thieves’ songs

(Update from post in March 2011 – larryjdunlap.com/ljd-blog) An amazing thing has happened on YouTube. One of the things we all mourn is the loss of one the first music videos ever, which we did in Hawaii for “Look Back in Love” in 1968, the song was supposed to become our first big, national hit. Not only did it feature the band, but also the Hawaiian girl I met there and later married, (Things We Lost in the Night, A Memoir of Love and Music in the 60s, Book 2: Enchanted). I finally located the cinematographer who shot it but he told me it was lost in a fire.  It appears that there are many modern admirers of the band who have taken our music to YouTube. While noodling around on the web I somehow got to a wikipedia page that mentioned Jan Hutchins and Maurice Williams and the Zodiacs, and then a link to a YouTube video (below) that was weird. But first things first. Here is the first video to kick this montage off …

Look Back in Love

END_OF_DOCUMENT_TOKEN_TO_BE_REPLACED

General George and the Ventures

When Dave, Mac and I first met Les, we didn’t realize what a good singer he was. He had an instrumental guitar band called the MG’s, who were highly influenced by Nokie Edwards and the Ventures. They were playing weekend sock hop dances with Bouncin’ Bill Baker for WIBC radio in Indianapolis, where they also backed our vocal group for a few appearances. Later, the MG’s backed us as the Reflections in our first studio sessions. When the vocal group made its first attempt to become a band, Les joined the three of us as a singer, and later became Stark Naked and the Car Thieves’ guitarist and vocal arranger. I do remember what a big deal it was when Nokie Edwards came in to a club to see us.

I just recently discovered that the Ventures’ first drummer, when they recorded Walk Don’t Run, and practically still a garage band, was George Babbit. Apparently, he was too young to play in many of the venues they were booked into when their record started to break. He entered the U.S. Air Force  and went on to become a four star general.

If your love rock ‘n roll, and remember the Ventures, I invite you to click on the link below to watch this reunion. I think it’s pretty cool and I enjoyed it a lot. Hopefully you will too, and it brings you a smile.

Back when our band, then called The Checkmates, came to California, most of us lived inland around Pleasant Hill and Walnut Creek because the first club we worked in was in Pittsburg, CA a few miles further north and east. When we started working at the Town Club in Hayward in late spring of 1965 we had to make that trek each night back and forth from work. 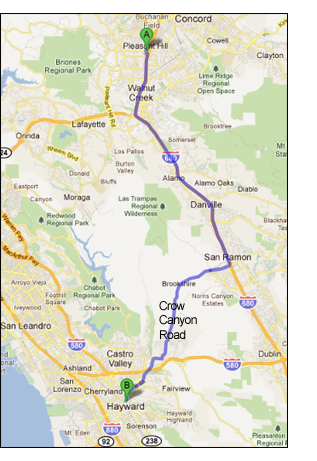 The hard part was the weekends. Not only did we have to play Friday and Saturday, 9pm to 2am like the other nights, we also had to be back Saturday and Sunday mornings, 4 hours later when the bar opened and liquor could be served to play a 4 hour jam session. Not enough time to get home and back so we found ways to stay up all night, at afterhours clubs like Soul City or even sleeping in the back seat of a car for a few hours. Later, to make more money we even became the house band at Soul City, which meant we were expected to play for 12 straight hours before we could drive from the East Bay back inland to our apartments.

Back then there wasn’t a freeway that ran through the mountains so we had to traverse twisty Crow Canyon Road when we were often so exhausted we would hallucinate. I remember staring out the window from the passenger side (not driving fortunately) and seeing mailboxes we were passing and losing all sense of motion and thinking they were rabbits. Going through the canyons was definitely like being down the rabbit hole. We did it for six months and in the end we had a much tighter band and a new name.

What I find particularly interesting is that in Google Maps, choosing directions between Pleasant Hill and Hayward, there is a ‘3D’ button. When pressed it actually switches to satellite view and animates traveling along the route, up and down and around along Crow Canyon to where it comes out on the backside of the mountains near San Ramon before heading north through Walnut Creek and into Pleasant Hill. Maybe I’m easily amused but I love taking that trip because it reminds me of those days. Many years ago it inspired me to write a short story, ‘The House on Crow Canyon Road’. Unfortunately through years of moving I seemed to have misplaced it. I hope in one of those motivated moments when I decide to really straighten out the garage that I’ll find it again.